The famous summer destination of the Philippines, Baguio City, is located in the southwestern portion of the Cordillera Central mountain range. It is 57 square kilometers of hilly land and about 1,524 meters high up in northern Luzon. Baguio used to be a town completely surrounded by the province of Benguet before being made into an … Read more

The famous summer destination of the Philippines, Baguio City, is located in the southwestern portion of the Cordillera Central mountain range. It is 57 square kilometers of hilly land and about 1,524 meters high up in northern Luzon. Baguio used to be a town completely surrounded by the province of Benguet before being made into an independent city.

How to get there

The municipality of Tuba surrounds the city on the south and west, Itogon on the east and on the north by Benguet’s capital, La Trinidad. Baguio is the main city of the Cordillera Administrative Region (CAR).

One can reach Baguio City, also known as the City of Pines, by plane (35 minutes) or by bus (6 hours).

Baguio has always been a famous Philippine travel destination. Because of its cool weather, it is where people flock especially during the warm months in summer.

Family holidays are often spent in this city.

The annual flower festival or Panagbenga is a tourist attraction in Baguio because of the colorful flower motor parade.

The Camp John Hay ground is nearly 250 acres. It was built as a recreation and resting camp for the US military men in 1903.

Today it has an international hotel, Camp John Hay Manor. The Manor boasts of its five-star services and accommodations, and world-class facilities.

While development has been ongoing, Camp John Hay is envisioned to be an ecotourism destination; thus, it will be a protected and managed forest with foot trails, paths, and flower gardens

Burnham Park is located in the center of Baguio City. It was named after Daniel Hudson Burnham, a famed American urban planner who laid the plans for the city. 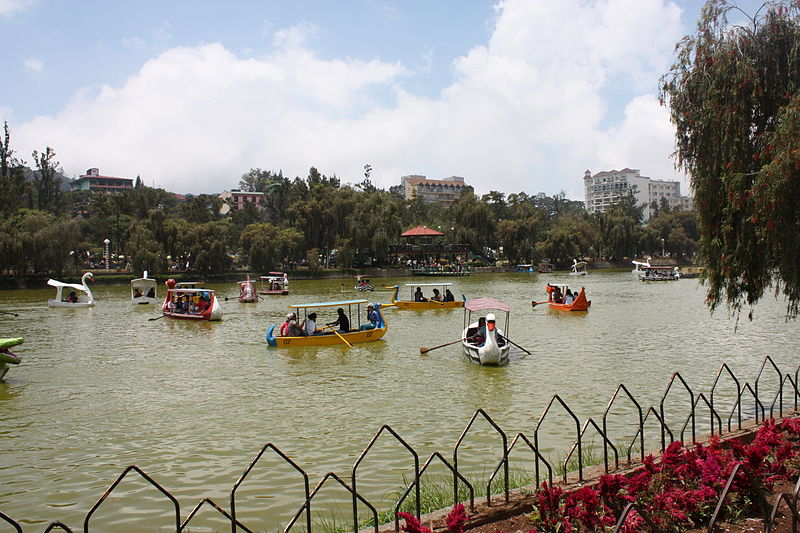 A day in the park can be a fun-filled. You can hire a boat on the lake, play games at the tennis and basketball courts, hire a bike or grab a book and relax on one of the numerous benches. At night it becomes a lover’s lane. No doubt it is one of the Philippines’ most

At night it becomes a lover’s lane. No doubt it is one of the Philippines’ most well-known and best-loved parks.

Burnham Park is located at the center of Baguio’s  developments. All other developments like Session Road, Baguio City Hall, Baguio Cathedral and the Baguio City Market were built around it.

A must-see in Baguio is the Mines View Park. It used to be a mining area before the American occupation but now it is a most-visited spot. The Park is about four kilometers from downtown Baguio and is very accessible by jeepney ride 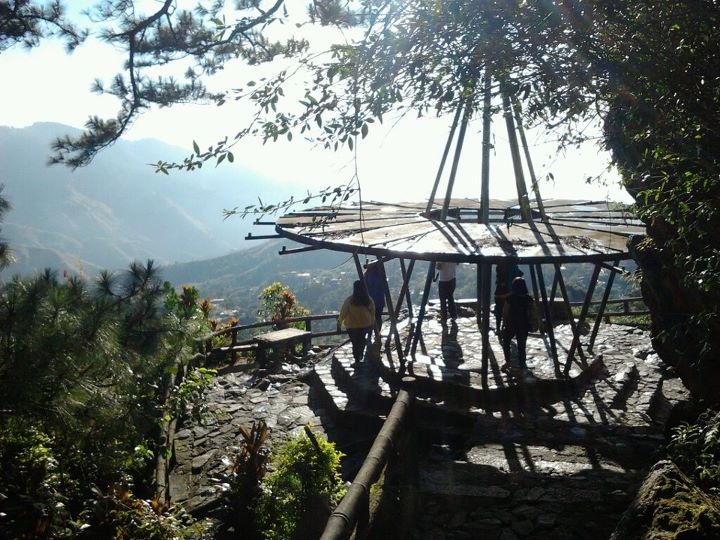 Visitors usually go to the Mines View Park after making a stop at the Mansion or the Wright Park.

An observation deck can be found at the Mines View Park where you can see the breathtaking view of Benguet’s gold and copper mines and the beautiful contours of the Cordillera mountain region. A winding stone-covered stairway, which is right next to the parking area will lead you to the observation deck.

Benches for visitors where they can rest and enjoy the view up above. Binoculars can be rented for a minimal fee so you can take a spectacular view of the nearby valley and mountains. Native Igorot tribesmen also would be willing to pose for a picture with the tourists for a few pesos.

Binoculars can be rented for a minimal fee so you can take a spectacular view of the nearby valley and mountains. Native Igorot tribesmen also would be willing to pose for a picture with the tourists for a few pesos.

Native Igorot tribesmen also would be willing to pose for a picture with the tourists for a few pesos.

Found at the entrance of the Mines View Park are stalls and cafes. Native handicraft, silver products, and jewelry. You can buy a variety of souvenirs around.

You’ll surely want to sample the juicy strawberries, corn-on-the-cob whether grilled or steamed, and other food served at the local snack bars and small stores found at the Mines View Park.

The grand and palatial Mansion House was built in 1908 as the official summer residence for the U.S. Governors-General.

As the official summer residence of the elected Philippine Presidents, the Mansion is an elegantly-designed building and guest house.

At the entrance is an elaborate main gate, made of ornate ironwork, which is said to be a replica of one of the main gates at Buckingham Palace in London. Guests can have photos of themselves standing in front of this gate.

From the Mansion House, one can also go straight to the Wright Park. Children are often seen riding the ponies that are available for hire at the park.

The Mansion House has also been the site of a number of international conferences.

Baguio City may be the coldest city but there is the unique opportunity to soak in natural thermal (or hot) springs. These are the Asin Hot Springs, located about 16 kilometers northwest of Baguio and can be reached by a 45-minute jeepney ride from the Session Road. The route down the Hot Springs passes through the green undergrowth and forests with an occasional waterfall.

The Asin Hot Springs has a swimming pool and, separately, the hot springs. You can enjoy the pools of hot sulphuric water, some of them with the water temperature at almost boiling point. 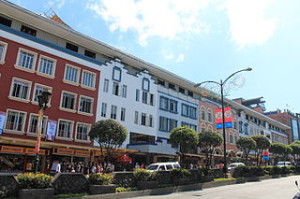 The main thoroughfare of the city is the Session Road. Local handicrafts, woodwork, silverware, jewelry, textiles and woven fabrics are found around the commercial district. This is where you find the department stores, banks, a movie house, and bazaars in the city.

There are also some hotels, bakeries, restaurants, newspaper stands, bookstores, boutiques, cafes, and studios along. Baguio residents, students in the different schools and universities in the city and local and foreign tourists alike spend most of their free time just climbing up and down Session Road.

Now with the SM Mall opened where Pines Hotel used to be located, people will surely be walking up and down this road more frequently.

Other Sights and Tourist Destinations

Check out the following travel destinations in Baguio City as well as other key cities in the Philippines.

Baguio is the coldest city in the Philippines with the temperature dropping to about an average of 8 degrees Celsius. Years ago, it was a famous honeymoon destination for many couples.